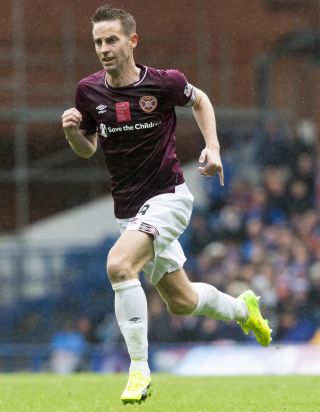 Steven MacLean hopes to repay Craig Levein’s faith in him by helping the Hearts boss get his hands on his first ever trophy.

Levein is two years away from racking up four decades in professional football but the former Jambos skipper has so far not won a major title or cup.

The ex-Leicester, Dundee United and Scotland manager came close twice as player in 1986, only for the Gorgie men to be pipped to the league crown on a dramatic last day by Celtic before losing the Scottish Cup to Aberdeen a week later.

After moving into coaching, his Tannadice charges then stormed to the final of the League Cup in 2008 but lost to Walter Smith’s Rangers on penalties.

Now the 36-year-old says he would love nothing better than to end Levein’s long wait when they take on the Hoops in Saturday’s William Hill Scottish Cup final at Hampden.

He said: “It would be good to help the manager finally chalk off a trophy.

“I spoke to him before the League Cup semi-final with Celtic earlier this season and asked him if he’d ever won anything and I was surprised when he said no.

“He had such a great playing career and has gone on to manage the national team and big clubs like Hearts, Dundee United and Leicester, you’d have thought he’d have picked up something along the way.

“As players we are obviously looking to win this weekend for everyone connected with the club.

“But it would be lovely for us to win it for the manager and finally allow him to get his hands on a trophy.

“He brought us all to the club so we all owe him. It would be extra special if we could pay him back with a cup.”