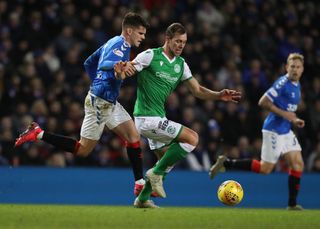 Steven Whittaker admits he feared his Hibernian career was over after a three-and-a-half-month stint in the Leith wilderness.

The former Rangers and Scotland defender played his last game for previous boss Paul Heckingbottom at the end of September.

Heckingbottom was axed just over a month later but Whittaker was not given the chance to impress new manager Jack Ross in first-team action until last month’s William Hill Scottish Cup draw with Dundee United at Tannadice.

But the 35-year-old grasped his opportunity and has now started four out of Hibs’ last five games.

Now instead of fearing his Hibs story was over, the veteran is now determined to show that there is still one last chapter on his career to be written.

Whittaker – who has been helping to coach Hibs’ academy youngsters in his spare time – said: “It’s good to be back on the pitch.

“I had a spell were I wasn’t playing so much and was focusing more on the coaching side. But it’s good to get that buzz back and get in amongst the boys and help them out on the park.

“Of course when you have that length of time out you start to wonder what the next chapter is and what your options are.

“I still believed I could do a job for the team and I was just glad to get that opportunity.

“I’m 35 now – turn 36 in the summer – so I know I won’t play all the games. But to be back involved and playing a part on the pitch, there’s no better feeling for a footballer than that.

“We’re going to have to use the squad, the manager has said that. Boys will come in and out of the team depending on who we’re playing.

“Everyone will be needed and we’re looking forward to the challenges ahead.”

Whittaker – whose team sit a point above seventh-placed Kilmarnock – hopes to be involved against Ross County on Wednesday night as Ross’ team look to cement their top-six status with victory at Easter Road.

He said: “It will be tough again. They will be fresh having had the weekend off and on the back of a good result against Livingston.

“We’ll need to be on our game but hopefully with the crowd behind us, we can get the victory.

“It looks likes (the fight for the top six) has tightened up over the last few weeks and we’re aware of the situation.

“Hopefully we can build on our points tally and push away from that.”