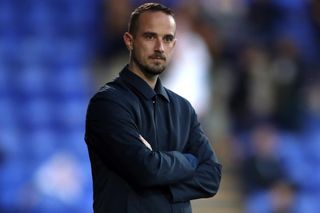 Sampson, the former England Women’s coach, was said to have made the remark during a conversation about a potential transfer target.

But Stevenage say an internal investigation showed there was no substance to the claims made against Sampson.

The Sky Bet League Two club reported that the allegations were phoned in to the Football Association by a former coach the day after he was told by Sampson that he no longer required his services at the Lamex Stadium.

“Like every professional club, no matter where the complaint comes from, we follow strict procedures, which were followed to the letter,” Stevenage chairman Phil Wallace was quoted as saying on the official club website.

“The claimant was offered the chance to make a formal complaint but declined this opportunity, instead choosing to call the FA.

“Nevertheless, CEO Alex Tunbridge acted immediately to interview and take statements from two individuals the claimant said were witnesses, as well as others that were present in the same meeting, but not mentioned by the claimant.

“In each case the witnesses did not support the allegations. Given that overwhelming outcome and the circumstances of the allegation, the club concluded there was no case to answer.

“Perhaps now that the FA have the evidence, they will make it clear there is no case to answer.”

Sampson was put in charge of winless Stevenage on Monday after Dino Maamria was sacked with the club one place off the bottom of League Two.

The 36-year-old Welshman was sacked by the FA in September 2017 following allegations of “inappropriate and unacceptable behaviour” in his previous role as manager at Bristol Academy.

He had also been the focus of bullying and racism claims, first made by Eni Aluko and then Drew Spence.

The FA said the allegations were investigated and Sampson was cleared of any wrongdoing.

But Sampson, who reached a financial settlement with the FA over his dismissal in January of this year, conceded he should have handled the claims differently, saying it would always be a “big regret” and apologised unreservedly to the two players.