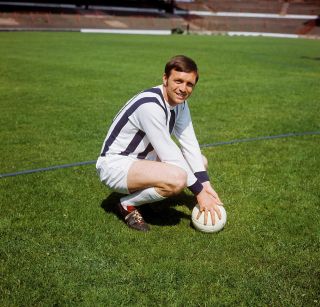 The leader of the study looking at the risk of dementia among footballers says the funding from the Football Association and Professional Footballers’ Association to date has not covered the cost of the research, and is “a drop in the ocean” compared to what will be needed to get a deeper understanding of the issue.

The initial findings of the FIELD study were published last October. It discovered that professional footballers were three and a half times more likely to die of neurodegenerative disease than age-matched members of the general population.

It compared deaths of 7,676 ex-players to 23,000 from the general population. The sample was taken from men who played professional football in Scotland, and were born between 1900 and 1976.

Listen to the children, not the @twitter voices predicting the end of the world if @ScottishFA make moves to address #dementia in #football#soccer#cte#concussionhttps://t.co/U9SGwF5o11— Dr Willie Stewart (@WillStewNeuro) January 16, 2020

The findings have led many to call for a fresh look at the issues of heading and the treatment of concussion in football, with the Scottish Football Association understood to be moving towards announcing a ban on heading in under-12s football training.

But Professor Willie Stewart, the consultant neuropathologist leading the three-year FIELD study at the University of Glasgow, says much more money needs to be spent on research.

“The FA and PFA have so far put very little money into this on a single project and aren’t rushing forward with any more money at the moment,” Dr Stewart told the PA news agency.

“The small sum of money we had (for FIELD) is a drop in the ocean.

“It doesn’t really cover costs but it allows us to get the thing off the ground. Much more money needs to go into this now, because this is potentially a huge issue.

At the UofG press conference for the FIELD study results, published today @NEJM, @UofGMVLS’s @WillStewNeuro says ‘This is the largest study to date looking at the incidence of neurodegenerative disease in any sport not just former professional footballers’ #WorldChangingGlasgowpic.twitter.com/HzmlxDjDIi— University of Glasgow (@UofGlasgow) October 21, 2019

“The three years that we’ve been running FIELD, the finance we got barely covered – in fact it hasn’t covered – the project. We’ve had to deal with other sources to cover that. More money is needed.”

Dawn Astle, the daughter of former West Brom and England forward Jeff Astle who died from chronic traumatic encephalopathy (CTE) aged 59 in 2002, has criticised the PFA – and in particular its chief executive Gordon Taylor – in the past for what she sees as a failure by the players’ union to tackle this issue adequately.

“In a business sense (the FIELD study) is what we might call a loss leader,” Stewart added.

“We knew that to drive this forward we had to do this research and that we were the only group who could draw it all together.

“So we had to accept we were not going to make money on this, we’re not even going to cover our costs on this, but what we are going to do is drive the next round of research forward.”

It is understood the study was jointly granted £210,000 by the FA and the PFA for the three-year project, and the amount was based on what the university felt was necessary to complete the work.

Both the FA and PFA are understood to be fully committed to the funding of further research in the future.

Stewart said the next steps in the FIELD study were to look at the mental health outcomes of the footballers compared to general population. The findings should be published in the next couple of months.

“There’s a suggestion from some of the reporting in America that CTE increases the risk of mental health problems and suicide, but I’ve never seen hard data that supports that from the American studies,” he added.

“But we have an opportunity with FIELD to answer that question within football. It will give us a much more meaningful insight into mental health in footballers.”

The study will then go on to look at its original sample of professionals and establish whether there are any inferences that can be drawn from the position or era they played in, and the duration of the players’ careers.

The FA and the PFA have been contacted for a response to Stewart’s comments concerning funding.