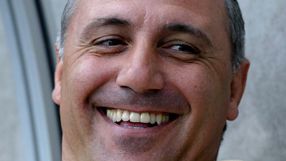 "I invited him (Stoichkov) and he accepted," Boiko Borisov told TV 7 on Bulgaria's Liberation Day. "He's to serve as an honorary consul."

Stoichkov, 45, was a key member of Barcelona's "Dream Team", who under Dutch coach Johan Cruyff won the La Liga title four times in succession in the early 1990s.

He was also instrumental in helping Barca win their first European Cup in 1992.

Stoichkov's goals propelled Bulgaria to the semi-finals of the 1994 World Cup finals in the United States and he is widely considered one of the country's all-time greatest athletes and its most popular export.

"I would like to thank him for his activities as he continues to raise the moral of the nation," said Borisov.

Stoichkov has failed to match the achievements of his playing career as a coach.

A three-year spell in charge of Bulgaria culminated in failure to reach the 2006 World Cup finals and then he left Spanish club Celta Vigo just months after taking the job.

In 2009, he joined South African club Mamelodi Sundowns and led them to second place in the league but resigned after the end of the season after not being offered a contract extension.