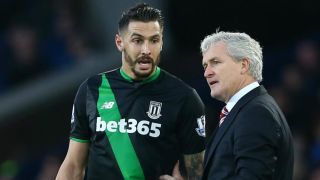 Stoke City confirmed they are likely to appeal Geoff Cameron's red card in the club's 2-1 loss to West Brom.

Cameron was shown a straight red card for pushing Claudio Yacob in the back of the neck, and is set to face a three-match ban if Stoke fail to overturn the suspension.

Stoke manager Mark Hughes claimed Yacob "made a meal of it" after the game, and said the club will look into an appeal.

"We’ll have a look at that and decide whether or not to appeal but I think it’s likely," Hughes said.

"It was unfortunate. I thought Geoff has reacted to a late challenge on a leg he injured in the first half. It is understandable to a certain extent.

"We weren’t too happy with the reaction of the lad Yacob, to be perfectly honest.

"I thought he has gone down with the intention of maybe getting Geoff sent off and unfortunately for us that’s what he’s able to do."

Cameron was sent off just two minutes after Stoke equalised late in the game, before a Jonny Evans goal in stoppage time sealed the win for West Brom.