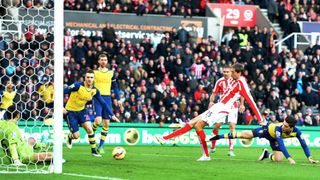 Arsene Wenger has challenged Premier League leaders Arsenal to show they have taken "a big step forward" by ending their Britannia Stadium hoodoo against Stoke City on Sunday.

The Britannia has not proved a happy hunting ground for Arsenal in recent times, with the Gunners losing three and drawing two of their last five visits to Staffordshire.

Indeed, a 3-2 loss in last season's corresponding fixture saw Wenger targeted by angry supporters when boarding a train back to London.

Arsenal, who beat Stoke 2-0 at the Emirates Stadium earlier this season, were held to a 3-3 draw at Liverpool on Wednesday with Joe Allen's last-minute volley rescuing the hosts. The result leaves them above Leicester City only on goal difference.

Wenger acknowledges his side are in for another tough outing against a side that has beaten Chelsea and both Manchester sides at the Britannia this term.

"They have done very well. They have moved forward as well because they have improved their creative potential with players like [Marko] Arnautovic, [Ibrahim] Afellay, [Xherdan] Shaqiri, Bojan [Krkic] - they can create and play.

"It is a good challenge for us as well because they have to maintain their record and we can show we have taken a big step forward and can beat them. It is an opportunity we want to take."

Wenger is weighing up whether to hand a debut to Mohamed Elneny, who signed from Basel on Thursday, while Alexis Sanchez (hamstring) is pushing to be involved for the first time since injuring himself against Norwich City in November.

Xherdan Shaqiri (hamstring) is out for the hosts and Geoff Cameron (ankle) also remains sidelined.

Stoke have been brilliant and frustrating in equal measure this season. High-calibre opponents have been laid to waste at home, but the likes of Watford, West Brom and Crystal Palace have all won at the Britannia.

But Hughes' men were comfortable in a 3-1 victory over 10-man Norwich City on Wednesday - a result that left them just four points shy of the Champions League places in seventh.

And the Welshman says Stoke's targets have been altered.

"At the beginning of the season we weren't aiming for the Champions League, I will be honest, but as the season goes on targets changed," said.

"You never know, we could get to a point in March, April where we are very much in the mix and we can give it a real go."

- Stoke City have lost just one of their seven Barclays Premier League games at the Britannia Stadium against Arsenal (W4 D2 L1).
- Mark Hughes is unbeaten on home soil as an opposition coach against Arsene Wenger in his last seven Premier League matches (W5 D2), spread across five different clubs. Overall at home his record in the league versus Wenger is (W6 D2 L2).
- Arsenal have conceded seven goals in their last two Premier League away games. They had let in eight in the previous nine on their travels this campaign.
- Olivier Giroud has the best minutes per goal ratio of any Premier League player this season to score more than five times, netting every 117 minutes on average.