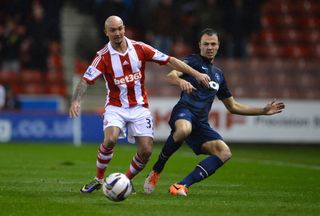 Ireland, who had been on loan at the Britannia Stadium from Aston Villa since the start of the season, has put pen to paper on a permanent deal, while Manchester City's Guidetti has been captured until the end of the current campaign.

Premier League limitations on loan signings required Stoke to complete the signing of Ireland, the scorer of three goals in 16 appearances this season, before delving into the loan market to swoop for Guidetti.

The Swedish frontman, who has made just one League Cup appearance for City, had been heavily linked with a move to Stoke in recent weeks, having previously worked under manager Mark Hughes during the Welshman's spell in charge at the Etihad Stadium.

Hughes expressed his delight at having made his first signings of the January transfer window.

"Stephen is a talented footballer and has shown what he’s capable of since he joined us," Stoke's boss told his club's official website. "We’re delighted to have made his switch a permanent arrangement.

"We wanted to try and add different options to our attacking threat and John will certainly do that.

"He’s someone who if you get him in the right areas will make the most of opportunities that come his way because he’s a natural goalscorer.

"There were several clubs who were interested in taking him on loan and we’re delighted that he has chosen to join us."