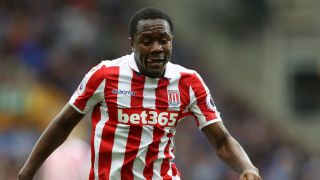 The Potters forked out a club-record £18.3million to sign Imbula from Porto in February 2016, with the 24-year-old signing a five-and-a-half-year contract.

However, Imbula has struggled to adapt to the demands of the Premier League and the last of his 12 top-flight appearances this term came in the goalless draw at Manchester City on March 8.

Stoke are unlikely to recoup the money they splashed out to bring him to the bet365 stadium, but Hughes is ready to sell if a deal can be struck.

"It's fair to say with Giannelli that it hasn't quite worked out how anyone would want and it's fair to say if there was interest in Giannelli from other parties then we would consider that," Hughes told a news conference ahead of Saturday's contest with Arsenal.

"Obviously it would have to be suitable to ourselves and the player as well. We haven't had any interest in fairness as far as I'm aware.

"We would look at things but it would have to be something that was correct for ourselves.

"The Premier League is a difficult league and some players will struggle - and it has been a frustration for him and ourselves that he hasn't progressed how we had hoped."

MH: It's fair to say with Giannelli, that things haven't quite worked out. If there is interest in him then we would consider that.May 12, 2017

Hughes also ruled out making a move for Leeds United full-back Charlie Taylor, who is out of contract at Elland Road.

Taylor, who refused to play last week's Championship encounter with Wigan Athletic according to Leeds boss Garry Monk, has been heavily linked with West Brom and Hughes says Stoke are not weighing up a move.

"Charlie Taylor is not a player we are involved in," he added. "We aren't looking to pursue anything - he isn't one of our targets."