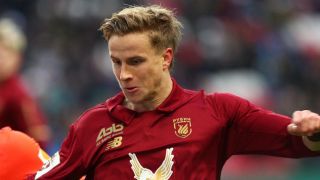 The right-back joins the managerless Potters on a four-and-a-half-year contract, signing for an undisclosed fee from Russian club Rubin Kazan.

Stoke sacked Mark Hughes on Saturday following their 2-1 FA Cup defeat at the hands of League Two Coventry City after a poor run that had left the club 18th in the Premier League.

"Moritz is a player we have been trailing for some time and was someone Mark Hughes wanted to bring into the club," chief executive Tony Scholes said.

"Moritz came over to England last week to undergo his medical and discuss terms and we have now been able to conclude his transfer."