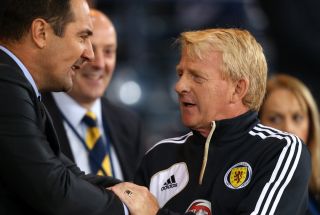 Robert Snodgrass, who joined the squad late due to the birth of his daughter last week, headed the opener, before Steven Naismith reacted first when Barry Bannan's penalty was saved to fire home a second.

Scotland's first home victory of their qualification campaign meant that they leapfrogged Wales and finished fourth in Group A, an encouraging achievement given the dismal start to their campaign that saw them take two points from their first four matches.

"That was probably our best performance of the campaign," Strachan said. "The squad is lacking a few attacking players, but the lads who played there were terrific.

"Last night, when you go to sleep, you imagine some victories, but that was beyond a dream."

And the former Southampton manager was particularly pleased with his side's back-to-back results against an excellent Croatia side, the group's top seeds, having also won 1-0 away in Zagreb.

"I was looking at some groups and there were some far easier than this one," he added.

"Croatia when we beat them were third in the world, yet Belgium beat them and that's what we were dealing with here.

"The players can take great confidence from this and go back to their clubs.

"There were good players watching from home and hopefully they were inspired by that too."