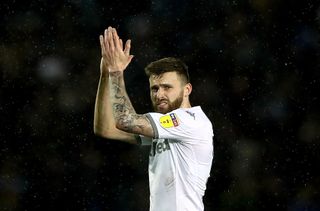 Stuart Dallas believes there is no better way for Leeds to start life in the Premier League than by playing Liverpool in a “champions versus champions” clash on Saturday.

Leeds will end a 16-year wait for top flight football when they turn out at Anfield, eager to build on their impressive Championship title under Marcelo Bielsa last season.

“Obviously the club has waited a long time to get back in the Premier League and there’s probably no tougher way to start the league than by playing the champions,” Dallas said.

And it will be an extra special moment for Dallas, who grew up in Cookstown as a Liverpool fan.

“As a young boy I dreamt of playing in the Premier League and hopefully this weekend I get that opportunity.” he added.

“To play against the team I grew up supporting as well will be extra special – but I’m a Leeds fan now.”

Dallas will need to quickly reset after the frustration of Northern Ireland’s 5-1 home defeat to Norway on Monday night, when Borussia Dortmund’s Erling Haaland terrorised the home defence all night.

The experience should be useful preparation both for Saturday, and for Northern Ireland’s trip to face Bosnia and Herzegovina in next month’s Euro 2020 qualifying playoff in Zenica.

“But we’ve shown in the past that we can go toe-to-toe with bigger sides – I look back on the Germany and Holland games here and we gave them as good as they gave us. Although obviously we didn’t get the results we wanted, we showed we have quality to do it.”

It was not the night that new manager Ian Baraclough was hoping for in his first home game in charge, but Dallas said the players had enjoyed their first week with the former Under-21s manager.

“It’s been good,” he said. “He’s full of energy, which is good. He’s been around the group before, he knows the players, knows the young lads coming through, and he has his way of playing.

Nor did captain Steven Davis deserve it on the night he equalled Pat Jennings’ Northern Ireland record by earning his 119th cap.

“I’m gutted we couldn’t get the result for him,” Dallas said.

“The manager spoke to us and said to make sure when we come back next month that we put a smile on his face when he breaks the record.”

The night ended with Haaland seeking to swap shirts with Dallas, no doubt seeking a Leeds souvenir for his father Alfe Inge.

“It was a nice touch. Obviously there’s a Leeds connection there but I didn’t think he’d want to swap shirts with me,” Dallas said.

“It’s nice that he keeps an eye on Leeds and he wished me all the best in the Premier League and that shows a lot about the type of person he is.

“His performance was incredible. He’s only 20 and he has a big future ahead of him… maybe someday he’ll come to Leeds.”