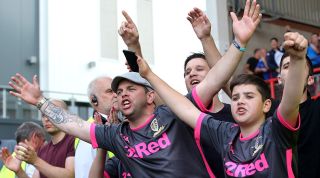 Rejoice! A study conducted by the University of Leeds and BetVictor has revealed the potential health benefits of watching football.

The experiment, using 25 Leeds fans aged between 20 and 60, found that the elevated heart rates supporters experienced while watching games was a “positive stress” equivalent to a moderate cardiovascular workout.

“It was clear that fans were passionate about the game, with heart rate elevated during the match to a similar level to that when going for a brisk walk,” said Dr Andrea Utley, Reader in Motor Control and Development at the University of Leeds.

“Ultimately, supporting your team at a football match gives you a moderate cardiovascular workout and, depending on the result of the match, a psychological boost or slump.”

INSIDE STORY A year with Marcelo Bielsa: the inside story of Leeds United's revival

Over the course of three games, participants’ heartrates increased to a high of 130 beats-per-minute, 64% up on the average base rate.

A Leeds goal had the most drastic effect on fans, increasing heart rates by an average of 27%, while a goal conceded also boosted them by 22%.

Watching games live in the stadium had a more pronounced effect on participants, with heart rates increased by 11% when compared to watching matches on television in a group setting.

Lowered blood pressure after wins was also found to have positive health benefits, although the increased levels experienced after defeats did not.

Psychologically, participants experienced significantly better moods following a win, although this heightened positivity only lasted for 24 hours. This was briefer than the equivalent negative mood that followed a loss, which in some cases lasted for days.

Among the three games analysed were both legs of Leeds’ dramatic playoff semi-final loss to Derby.

So there you have it – football is officially good for you. Just don't lose...

QUIZ! Can you name Wesley Sneijder's 25 most frequent Netherlands team-mates?