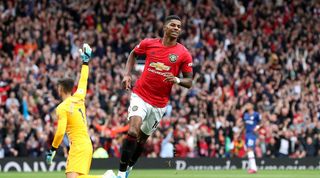 They did not, of course. Possession may be nine-tenths of the law, but it contributes nothing to footballing scorelines and United, with slightly less of the ball, scored four more goals.

Doing more with less is a theme of many an industry. Maybe Ole Gunnar Solskjaer’s United are the poster boys for a policy. They have five flagship wins under the Norwegian and perhaps it was a surprise they had as much as 46 per cent of possession at Old Trafford. Last season, they beat Tottenham with 39 per cent, Arsenal with 37, Chelsea with 33 and Paris Saint-Germain with a mere 28 per cent of it. They have played 12 games against top-six or Champions League opponents under Solskjaer and only twice had a majority share of possession: the most, 54 per cent, came in a 2-0 defeat to Arsenal. Less is more.

Solskjaer’s fondness for lightning counter-attacking is no secret. He has doubled down on the theory in the summer, signing the electric Daniel James, selling Romelu Lukaku who, whatever the statistics on his Twitter feed may show, looks slower on the break than Marcus Rashford and Anthony Martial and constructing a fast, fluid forward line. His United promise to be the opposite of Louis van Gaal’s: less sideways passing, more acceleration, excitement and goals.

But he could also be the anti-Guardiola? Top teams always tended to have more of the ball, but that has been taken to new levels since Pep Guardiola took over at Barcelona in 2008. His Manchester City topped the charts with 66.4 per cent in 2017-18; United ranked sixth of the top six, as they did in 2018-19, and it is a safe bet they will again, not least because, even if managers like Mauricio Pochettino and Jurgen Klopp prioritise pressing over passing, their teams consistently have more of the ball than United. One of the few common denominators between Solskjaer and Jose Mourinho is that neither has a fixation with possession, and over the last two years, United have averaged under 54 per cent.

It is a gulf, and one that may widen. Solskjaer’s midfield functioned well against Chelsea, partly due to their efforts off the ball. But Scott McTominay completed just 39 passes. In a more advanced role, Andreas Pereira managed only 11 – including one assist – in his 73 minutes on the pitch. Their City counterparts, Rodri and Kevin de Bruyne, completed 65 and 38 respectively.

Paul Pogba is a wonderful long-range passer who can spring breaks, as he showed by releasing Rashford for the forward’s second goal, and is ideally suited to Solskjaer’s directness but the most accurate midfield distributor at Old Trafford last season was Ander Herrera, gone and not replaced. Second was Nemanja Matic, dropped more for his ponderousness than his passing.

Yet perhaps the most obvious deficiency in their summer spending was not the failure to find a successor to Lukaku, but the reluctance to hire a professional passer. No move for Christian Eriksen materialised, nor for an alternative.

Instead United have gone all in on a philosophy of swift counter-attacking. They picked off Chelsea on the break, with finishing that prompted Frank Lampard to call them clinical and aided by improved defending, but affording gifted teams more of the ball does not feel a failsafe formula.

A commendably candid Solskjaer said they were lucky to reach half-time ahead on Sunday. His five most famous wins also include a David de Gea masterclass, against Tottenham, and an evening in Paris was that was so remarkable that it had the feel of a one-off. Perhaps there is less margin for error when United have less of the ball.

But if Solskjaer succeeds, it will be instructive if it produces a host of imitators and if he reverses a trend in elite-level football, managing penetration without possession in a way perhaps only Mourinho, rather nearer his peak, and Diego Simeone have done in the last decade.

Solskjaer’s own influences are obvious. His Sir Alex Ferguson tribute act may have produced a team whose methods bear closer comparison with the sides of 1994 and 1999 than the class of 2008, whose undoing then came against Guardiola’s Barcelona, but with the difference that those 20th-century greats rarely faced rivals who had 60-plus per cent of the ball.

Perhaps Solskjaer will turn back time, or perhaps the verdict will be that he ignored the evidence of the last 11 years.  But if Guardiola was the revolutionary, is he the counter-revolutionary?