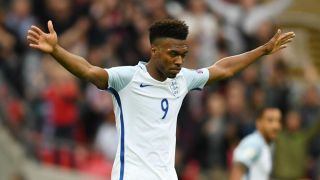 Daniel Sturridge insists England have nothing to fear in Tuesday's World Cup qualifier against Slovenia and says the scoreline is immaterial so long as they win.

England started Gareth Southgate's interim tenure as manager with a 2-0 victory over Malta at Wembley on Saturday to make it two wins from two in Group F.

On paper, the trip to Ljubljana poses a more difficult task for the Three Lions but Liverpool striker Sturridge is confident of returning home with all three points if they prepare in the correct manner.

"It is going to be a difficult game for us but it's about our preparation," Sturridge told FA TV.

"It is important to just keep winning games. It is not about how many goals you score; if we win 4-0 or 5-0, 1-0 is the exact same result and that is what matters most.

"As long as we keep winning games and performing well, that is the most important thing."