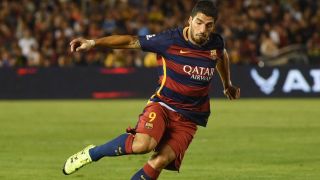 Barcelona star Luis Suarez backed signings Arda Turan and Aleix Vidal to have an impact despite being sidelined until January.

Turan and Vidal have both arrived at the La Liga and European champions in the off-season, but cannot play until January 2016 due to the club's transfer ban.

Suarez believes the pair's extended wait for their debuts may be good for when they can play in official games for Barca.

"They are strange situations for them because they are training but they know they can't play in official matches," the Uruguay international told Barca TV.

"It's complicated for them, but they knew that when they came here, they knew they would have to wait until January.

"They would have to wait for some time, so now they can just adapt to the team, join in with training and that's an extra contribution I think that's going to do them good when they come to play official games."

Barca enter 2015-16 on the back of a treble-winning campaign that included the league, UEFA Champions League and Copa del Rey crowns.

Suarez, 28, scored 25 goals in all competitions in his first season at the club - and hopes he can continue contributing.

"You can never say whether you've reached your complete peak," he said.

"Obviously bigger demands are made of strikers, they need to score goals, but as long as I'm in the team and helping to score goals and doing things for the benefit of the team then I feel that I'm doing the right thing and that's the most important thing."