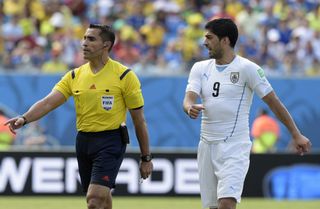 Rodriguez, 40, is in his third World Cup, and will be the man in the middle when hosts Brazil face Germany in Belo Horizonte.

FIFA, who confirmed the appointment on their official website, have opted to hand Rodriguez the high-profile fixture despite the referee failing to send off Suarez for sinking his teeth into Chiellini during Uruguay's group game with Italy earlier in the tournament.

Suarez's actions went unseen by match officials during that fixture, but the Liverpool striker was punished retrospectively, receiving a four-month ban from all football-related activity and a nine-match international suspension.

While Suarez and Uruguay's World Cup has been over for some time, Rodriguez is now set to take charge of the most prestigious game of his career.

The Mexican has previously refereed three CONCACAF Champions League finals, together with the final of the 2007 FIFA Club World Cup between Boca Juniors and AC Milan.

Rodriguez was also the referee for the World Cup group fixture between Belgium and Algeria prior to the clash between Italy and Uruguay.

He did brandish a red card in the latter clash, dismissing Italy's Claudio Marchisio for a high challenge on Egidio Arevalo that took place before Suarez's headline-grabbing transgression.