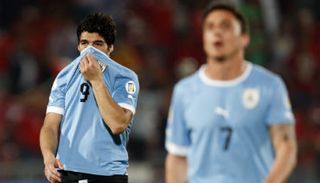 Football's governing body FIFA opened an investigation after Argentine referee Nestor Pitana missed the incident, which happened as Suarez tussled with West Bromwich Albion player Gonzalo Jara as they lined up for a corner during Chile's 2-0 win in Santiago.

"The matter in question does not require the intervention of the FIFA disciplinary committee and therefore the disciplinary procedure in question is declared closed," FIFA said in a fax which was published on the AUF website.

AUF president Sebastian Bauza, who has claimed Suarez is persecuted, especially in England where he plays for Liverpool, said the forward needed to realise that he was being scrutinised.

"It's very good news for Luis, the national team and for the whole group," he said.

"We understand that from now on, Luis should realise that he will be watched from all sides and we hope that this experience, when added to others, will be useful, so that he becomes the player will all want him to be."

The AUF had argued in his defence that Suarez reacted to provocation by Jara, who grabbed his genitals. It also submitted video evidence of incidents missed by referees in other games and which were not followed up by FIFA.

Suarez will, however, miss Uruguay's next World Cup qualifier away to Venezuela on June 11 because of accumulated yellow cards after he was booked in a separate incident against Chile.

Uruguay, semi-finalists in South Africa three years ago, are in danger of missing the 2014 tournament in Brazil after taking only two points from their last six qualifiers and dropping to sixth in the South American group.