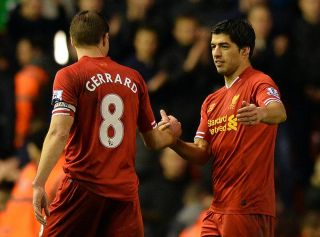 With three games of the Premier League season remaining, the Anfield club are on the verge of their first league title since 1990, with Suarez's 30 goals playing a huge part in their success.

He has been ably supported by a crop of young talent, however, including the likes of strike partner Daniel Sturridge, teenage attacker Raheem Sterling and full-back Jon Flanagan.

The future seems bright for Brendan Rodgers' men - a prospect that excites the Uruguayan - as Liverpool prepare to step up to the challenge of UEFA Champions League football next term.

"Yes, there is a lot of potential," he told Perform.

"There are very young players such as Sturridge, (Philippe) Coutinho, Luis Alberto that hasn’t played much, Joe Allen, Flanagan.

"All of them are young players that are in a good team; they have played a lot this year and with a couple of good players that could bring experience to the team with European experience, it could help us."

Another man to play a key role in Liverpool's success is Gerrard.

The Anfield skipper has flourished in a new, deeper role in midfield, and Suarez paid tribute to the 33-year-old for everything he has done at the club.

"It is clear that, as a player everyone in the world knows what he is," he said.

"He brings a lot to the group and really is a true skipper in every way. He always respects others' decisions because, despite being the captain and having been at the club for more than 15 years, his word is not greater than any other one.

"He respects others' decisions and that's how good he is. Also as a person off the pitch, as a friend, he has proven a lot during all that I experienced.

"He helped me during the summer and I have only words of gratitude for all he did and he will be always present as an important person in my football career."