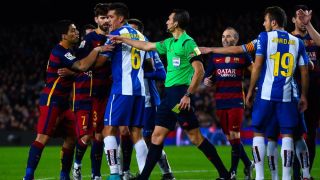 Barcelona star Luis Suarez may face a suspension after being accused of allegedly provoking Espanyol players in the tunnel following his side's Copa del Rey win.

A brace from Lionel Messi and goals from Gerard Pique and Neymar saw Barca to a 4-1 victory in the last-16 first leg on Wednesday.

The rivalry threatened to boil over in the second half, with Hernan Perez and Pape Diop sent off as Espanyol were reduced to nine men.

In the official referee's report, Suarez is accused of provoking a confrontation between players from both clubs in the tunnel.

The Uruguayan played a full game in the derby clash, during which Espanyol took the lead through Felipe Caicedo.

The second leg of the tie will be played at Cornella on January 13.