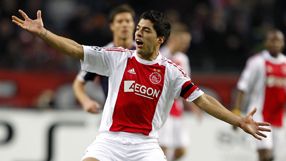 Ajax added on their website on Wednesday that a seven-match domestic ban proposed by the KNVB's disciplinary board had been accepted by captain Suarez who was originally suspended for two matches and fined by the Amsterdam club.

Suarez will miss six league games and one Dutch Cup match before he can return to action on Feb. 4 but is available for their Champions League match away to AC Milan on December 8.

Ajax's 4-0 home defeat by Real Madrid on Tuesday ended their hopes of reaching the knockout stage but they can finish third in Group G to clinch a consolation place in the Europa League.

Suarez, who has scored seven league goals this season, earned Uruguay a place in this year's World Cup semi-finals when his deliberate handball in the final minute of extra time against Ghana prevented a decisive goal from Dominic Adiyiah.

The striker, who blocked Adiyiah's attempt with two hands on the line, was sent off but his team won a penalty shootout.

Suarez argued with Bakkal, who stood on the Uruguayan's foot, prompting him to bite Bakkal's shoulder although the incident was missed by the referee.

In 2007, Frenchman Sebastian Sansoni of Vitesse Arnhem bit NEC Nijmegen's Roy Beerens on the nose and got a five-match ban.