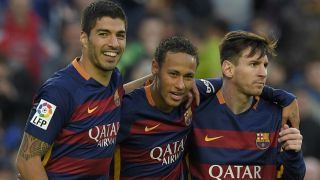 Messi and Neymar made the final-three, along with Real Madrid's Cristiano Ronaldo, while Barcelona striker Luis Suarez was the unlucky one to miss out.

Suarez finished 2015 as the top-scorer in La Liga, with MSN breaking record after record in the calendar year for goals scored.

Thiago, who played with Messi at Barca before making the switch to Bayern Munich in 2013, said the trio should all be in the running for the Ballon d'Or.

"Right now, all three of them are deserving of being in the running for the Ballon d'Or," he said.

"They're a fabulous trio, just like the tridents made up of Xavi, Leo and [Andres] Iniesta, or Messi, [Samuel] Eto'o and [Thierry] Henry were. It's only at the end of your career when you can look back and assess things.

"They're well on track to become one of the best attacking trios in the history of the game."

Thiago added he was happy in Munich but did not rule out a move back to the Camp Nou in the future.

"At present, I feel really good where I am," he said. "Further down the line, we'll have to see what happens.

"I enjoy being where I am now, and I want to lift silverware with Bayern."