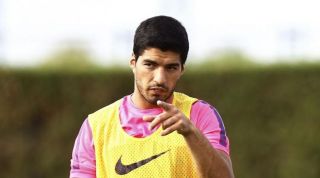 Uruguay international Suarez, who joined Barca in a reported €94 million (£75m) move from Liverpool last month, was cleared to train and play in non-competitive matches by the Court of Arbitration for Sport (CAS) on Thursday, although his four-month ban from official matches for biting Italy's Giorgio Chiellini at the World Cup remains in effect.

New Barca head coach Luis Enrique – appointed in May following the departure of Gerardo Martino – has been impressed with what he has seen from Suarez so far and will give him a run out at Camp Nou as the Catalan club face their Mexican opponents for the Joan Gamper Trophy.

"The impression I have had of Luis Suarez in the two training sessions we have done is that he is a player of a very high level," Luis Enrique said.

"He could have a few minutes [on Monday] in front of the fans."

Suarez's suspension means he will not be able to return to competitive action until October 25, meaning he could make his official debut in the Clasico clash with Real Madrid at the Santiago Bernabeu that is scheduled for that weekend.

Luis Enrique feels his squad is strong enough to cope with Suarez's absence, but refused to rule out dipping back into the transfer window for reinforcements, with Fiorentina playmaker Juan Cuadrado mooted as a potential target.

"I don't think it [Suarez's ban] will have any effect," he added.

"The squad is strong enough and solid enough. We just have to focus on the players we have available."

"I don't think the squad is necessarily finalised, the club always has to be looking at the possibility of reinforcing the squad in the transfer window.

"We're always open to the possibility of improving the squad."