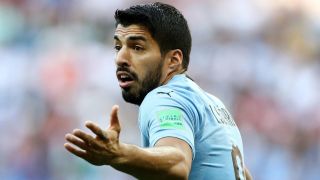 Luis Suarez stuck to the script by scoring on his 100th international appearance for Uruguay, but you could be forgiven for thinking Russia were playing on Wednesday at Rostov Arena, where the loudest chants were neither for the Celeste nor their opponents Saudi Arabia.

Instead it was the fans of a resurgent host nation who made their presence felt, as they embarked on a noisy scouting mission ahead of what now looms as an unexpectedly decisive showdown to determine the winners of Group A at the World Cup.

Uruguay have played the part that was expected of them, edging past Egypt and overcoming the Saudis to reach the round of 16, where Portugal, Iran or Spain will lie in wait.

But the hosts have surprised everyone, including themselves, to make a flying start to the tournament.

Not since Euro 2008, when Guus Hiddink took a team inspired by Andrey Arshavin to the semi-finals, have Russia bestrode the international stage with such confidence.

Despite having failed to win any of their previous seven friendlies leading up to their big party, a 5-0 thrashing of Saudi Arabia in the opening game was followed by a convincing 3-1 win over Mohamed Salah's Egypt, as Denis Cheryshev, rather than the stricken Liverpool star, fired himself into early golden boot contention with his third goal of the finals.

That result sparked scenes of wild celebration across this vast and eclectic country, and the knock-on effect was plain to see a day later on the banks of the Don River.

As well as a smattering of Saudi green and a healthy representation of Uruguay's sky blue, the colours of Russia were prominent among supporters making their way to the ground and in the stands.

Indeed, the first chant of the match was not for Uruguay or the Saudis.

Rather, a guttural cry of "Ro-ssi-ya, Ro-ssi-ya!" rose up in the first 10 minutes, and did so again sporadically throughout the contest.

After lying dormant amid a series of recent embarrassments, football fever has once again gripped the Russian Federation.

The buoyancy of Stanislav Cherchesov's team will be greatly welcomed by FIFA and all of those attending the event, with the exception, of course, of Uruguay.

Oscar Tabarez's side might have expected Egypt, before Salah injured his shoulder in the Champions League final, to pose the biggest threat to their ambitions of advancing as group winners.

Instead it will be Cheryshev, Artem Dzyuba and Aleksandr Golovin barring their path, not to mention what is sure to be a vociferous, partisan crowd at Samara Arena, and 144 million more people roaring them on from Kaliningrad to Vladivostok.

Uruguay will be no pushovers. But they laboured, admittedly in difficult conditions, against Saudi Arabia in a manner Russia did not, and should steal themselves for a searching examination against the 2018 World Cup's most welcome surprise package.