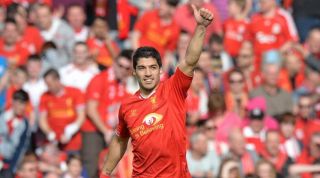 The Uruguay international has spearheaded his side's Premier League title challenge this season, scoring 30 goals in 31 games to date.

Liverpool had three players in contention for the PFA's main gong, with Daniel Sturridge and captain Steven Gerrard also nominated, but Suarez unsurprisingly gained recognition for a series of magnificent displays.

Chelsea's Eden Hazard finished second to Suarez in the voting, but had the consolation of picking up the Young Player of the Year prize, while Manchester City midfielder Yaya Toure claimed third.

Suarez found himself banned for 10 league matches at the end of the 2012-13 season after biting Chelsea's Branislav Ivanovic and was subsequently booed at last year's ceremony, when he was beaten to the Player of the Year award by Gareth Bale.

However, after missing the first six matches of this campaign due to his suspension, the 27-year-old quickly made up for lost time and moved clear at the top of the Premier League's scoring charts.

An influential figure for Liverpool throughout the season, Suarez was the strong favourite to be honoured by the PFA long before their annual awards evening took place in London on Sunday.

"The Premier League is full of really great players and so it is a great honour when these players recognise your work on the pitch," he said.

"Really this is for my team-mates and the staff at Liverpool because without their help I wouldn't have this prize."

Hazard has thrived in his second season at Chelsea and beat off competition from Sturridge and Southampton full-back Luke Shaw to take the young player prize.