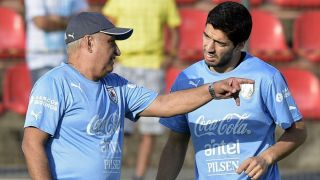 Luis Suarez has paid tribute following the death of Uruguay physiotherapist Walter Ferreira - the man who proved pivotal in helping the striker recover from a knee injury in time to feature at the 2014 World Cup in Brazil.

Ferreira, 64, passed away on Sunday following a battle with cancer and Suarez was quick to pay tribute to the national team physio for assisting with a remarkable recovery following surgery on a meniscus injury to his left knee in the build-up to the competition.

Ferreira - also credited with helping the likes of Uruguay stars Daniel Fonseca and Paolo Montero return from injuries in recent decades - interrupted his own cancer treatment in order to aid Suarez's rehabilitation.

Suarez needed less than a month to get back to full fitness following the injury sustained in training and, on his return to action, dedicated his first goal against England in their 2-1 group-stage victory to the physio.

"Today we lost more than a friend ... a fighter who, day by day, not only fought for himself but for everyone else," the Barcelona man posted via social media.

"I'll never forget what you did for me, because you taught me many things in life, which I still have present. Thank you for the opportunity to play a World Cup. Thank you for all you gave football and thanks for what a great human being you were.

"I'll never forget. My deepest condolences to the family. Rest in peace, WALTER."

Suarez's brace against England proved to be his only goals at the World Cup as Uruguay exited in the round of 16 with a 2-0 defeat to Colombia.

Suarez was suspended for that defeat having bitten Italy defender Giorgio Chiellini in their final group-stage game - his actions leading to a four-month ban from competitive football.