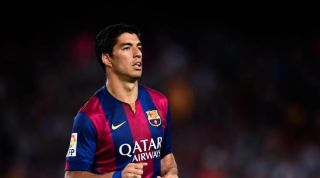 Suarez - who was presented to media as a Barcelona player for the first time on Tuesday - admitted he felt "depressed" after being caught biting Italy's Giorgio Chiellini during this year's World Cup.

It was the third time in four years that Suarez had bitten an opponent on the football field and FIFA were quick to punish him, initially suspending him for four months from all football-related activity and Uruguay's next nine competitive internationals.

That ban has since been slightly revised, with the 27-year-old now allowed to train and play friendlies for his club, but the striker is not eligible to make his competitive bow for Barcelona until late October's Clasico meeting with Real Madrid, while he has also been ruled out of Uruguay's 2015 Copa America campaign.

And in a revealing news conference, in which Barcelona officials confirmed they had paid £65million to Liverpool for Suarez - not the widely reported £75 million - Suarez spoke of his commitment to change.

Asked about FIFA's ban, Suarez said: "The suspension, well that's what there is and I have just got to respect it.

"The second question [how to prevent further biting] - that's a private matter. I'd rather not comment. But I am speaking to professionals. The right professionals.

"Afterwards [following the Chiellini bite], I was really depressed. I didn't feel like doing anything.

"I spoke to my psychologist and he said that I had to face reality and say I was sorry."

When quizzed if he was worried that his move to Barca - which the Spanish club say negotiations over started before the World Cup - would fall down because of his bite, Suarez added: "Of course I was concerned.

"Not just [about] the transfer... my person [and] what I did. I'm trying to forget about it and concentrate on the present."

Suarez made a brief Barca debut on Monday as the Catalan club routed Mexican visitors Leon 6-0 at Camp Nou.