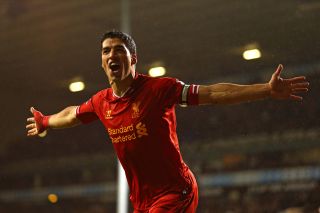 The League One side travel to Anfield, where Liverpool will be determined to avenge last season's 3-2 loss to the same opponents in the fourth round.

Suarez played, and scored, in that meeting at Boundary Park, although it had been thought Brendan Rodgers could take the opportunity to rest the prolific Uruguay striker.

With Suarez having netted 20 goals in just 15 Premier League games this term, he is certainly not short of form.

And Pascoe has claimed any attempt Rodgers makes to rest the 26-year-old would be rejected, as Suarez is so keen to keep playing - despite recently suffering with a foot injury.

He said: "You would always look at that (resting players) but if you ask Luis, he would say no because he wants to play every game.

"He couldn't put his boot on two days before the Hull game. He just has that kind of mentality and is a man who wants to play every game.

"If Brendan told him he was going to rest him in the cup, I'm sure he would say he wants to play. That's the kind of person he is. He wants to play every game.

"He just gets up and gets on with it, that's the type he is - he just gets up, dusts himself down and what he does best then is put the ball in the net."

Rodgers is not blessed with striking options for the game, with Daniel Sturridge still injured and Iago Asas regaining fitness after a thigh lay-off, although the Spaniard featured in all three of Liverpool's festive fixtures, starting Wednesday's 2-0 win over Hull City.