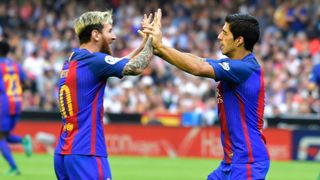 Barcelona forward Luis Suarez has urged Lionel Messi to follow in his footsteps and sign a new deal at Camp Nou.

The LaLiga champions announced on Thursday that they have agreed terms with the Uruguay international over a contract extension until 2021 and Suarez hopes Messi will be next to agree a renewal, with the Argentine's existing deal due to expire in 2018.

"My happiness will be complete only if Messi renews his contract as well," Suarez told reporters.

"But my renewal is not a message to Messi. He is old enough to know what is good for him."

Messi was this week beaten to the Ballon d'Or by Cristiano Ronaldo, but Suarez is adamant his team-mate should have been the one lifting the prestigious individual trophy.

"Everyone has their own criteria," he added.

"But as far as I'm concerned, Leo deserves to win it every year because of what he gives to football.

Suarez's new deal will keep him at Camp Nou until he turns 34 and he would be open to ending his career at Barca.

"Any player would want to end their career at a club where they feel comfortable," the striker stressed.

"We will have to see, but I will never lose either my ambition or my enthusiasm."