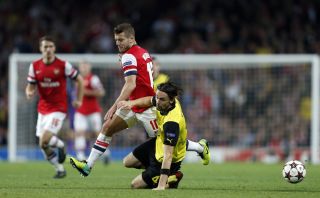 The Bundesliga outfit clinched a 2-1 victory on Tuesday courtesy of a late Robert Lewandowski goal, after Olivier Giroud had cancelled out Henrikh Mkhitaryan's 16th-minute opener.

Subotic claimed the victory was unexpected, adding that Arsenal were not at their fluent best.

"We are obviously very happy with the three points. We came here not expecting anything but hoping for the best obviously," he said.

"As the game progressed we always wanted more and more. I don't think Arsenal were playing their best football, they were trying to play pretty safe.

"They felt they were going to score one goal more than us through their patience and through their play, but we ran a lot and defended very well and had some great chances."

Lewandowski's goal was his 10th in all competitions this season, with Bayern Munich reported as a likely destination for the Pole when his contract finishes at the end of the season.

Subotic felt his team-mate deserved the goal for his workrate against Arsenal's defensive pairing of Per Mertesacker and Laurent Koscielny.

"(The winning goal) was a huge relief," he continued.

"(Lewandowski) had to fight for 85 minutes to get his goal and he definitely deserved it because it was a tough fight for him against Mertesacker and Koscielny and I'm happy for him.