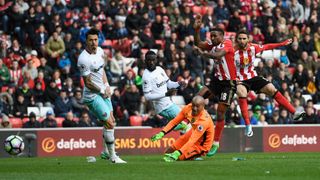 Sunderland gave themselves the faintest of lifelines in the battle against relegation after a late Fabio Borini goal saw them draw 2-2 with West Ham on Saturday.

Goals early in each half from Andre Ayew and James Collins had looked set to secure all three points for the visitors at the Stadium of Light and make it back-to-back wins for Slaven Bilic's side for the first time since January.

Sunderland had drawn level through Wahbi Khazri and they snatched a point through Borini's late strike, although a first win since February 4 was not to be as chants in opposition to manager David Moyes were heard in earnest for the first time this season.

Ayew opened the scoring after only five minutes but Khazri marked his first league start since October by scoring straight from a corner as Sunderland celebrated their first league goal in 701 minutes to head into the break on level terms.

Moyes' side conceded in the first minute of the second half in last week's 3-0 loss to Manchester United and they seemed not to have learned their lesson, as Collins headed West Ham back in front soon after the break.

Didier Ndong wasted a clear chance to equalise but Sunderland, who lost Billy Jones to a worrisome head injury, levelled in the 90th minute as Borini pounced on an error from Darren Randolph.

West Ham are surely safe, having moved nine points clear of the drop zone, but Sunderland's hopes of survival look slim despite closing to within nine points of 17th-place Hull City, having played a game less.

Jordan Pickford made a good save to keep out Manuel Lanzini's free-kick in only the second minute but it did not take long for West Ham to find the breakthrough.

Andy Carroll, captain in the absence of the suspended Mark Noble, scuffed a volley across the box and into the path of the unmarked Ayew, who took a touch before slotting the ball into the bottom-right corner.

It was another moment of misfortune in a wretched season for Sunderland fans but they watched their team draw level on 26 minutes thanks to their own slice of luck.

Khazri whipped in a corner that curled all the way into the bottom corner of Randolph's net, prompting a chorus of "are you watching David Moyes?" to reverberate around the stands in response to the Tunisian's puzzling absence from the side for much of this season.

There were question marks as to whether Victor Anichebe fouled Randolph on the line and West Ham frustrations increased when Ayew missed a chance to make it 2-1, hooking the ball over the bar from inside the six-yard box after more good work from Carroll.

Sunderland finished the half the better team but their good work was undone within two minutes of the restart, as Collins rose highest to glance Robert Snodgrass' inswinging corner beyond Pickford's reach and into the net.

13 - Sunderland have conceded more headed goals than any other Premier League side this season. Bombardment.April 15, 2017

Khazri was Sunderland's brightest player by a distance and he set up Ndong 18 yards from goal only to see the midfielder balloon his shot over the bar, much to the frustration of Moyes and the home bench.

Jones was taken off on a stretcher after he landed heavily following a tussle with Arthur Masuaku, with Moyes throwing on an extra attacker in the form of Borini after a long delay, and that boldness paid off as the Italian levelled in the 90th minute.

Randolph failed to collect a high cross into the box and the ball fell to the feet of Borini, who lashed it through the covering defenders and into the net from the edge of the area.

Borini celebrated with gusto and Sunderland pushed for a winner in the 10 minutes of injury time, with Sam Byram sent off for a second yellow to heighten West Ham's anxiety, but that crucial third goal proved elusive.