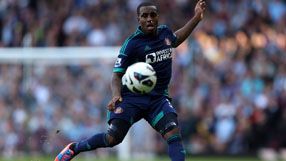 Rose was subjected to racist abuse while representing his country in Serbia on Wednesday, a matter which has only been made worse by the Serbian FA's decision to point the finger at the Englishman himself.

Now, with a highly-charged north-east derby on the horizon, Sunderland manager O'Neill has realised the need to approach the situation with caution.

Speaking to The Telegraph, O'Neill said: "I don't think it is something Danny will ever have encountered and I have the utmost sympathy for him. He shouldn't have to endure that and that goes for everybody concerned.

"I’ll take the opportunity to let things lie for a day or two and I’ll speak to him closer to the time and see what state of mind he is in.

"Whether he can take it in his stride, I don’t know. I’ll see whether things die down and then try to focus his mind on the game. It will depend very much on how he feels, but I’m sure he will want to play."

Sunderland will certainly hope Rose chooses to play, having impressed since joining on loan from Tottenham Hotspur in August.

The weight of events in Serbia this week has been outlined in how, in a game where partisanship is the order of the day, Newcastle supporters are said to be planning to join in the applause of Rose if he enters proceedings on Sunday.

"It would be exceptionally gracious and I’m sure it would be appreciated," said O'Neill.