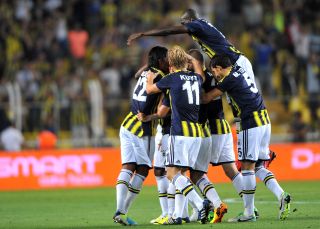 Ersun Yanal's men left it late to clinch the three points however, with the sides having been level until the final minute after first-half goals from Moussa Sow and Randall Azofeifa.

However, substitute Emmanuel Emenike picked the ideal time to open his league account for the club, heading home Dirk Kuyt's cross in the last minute of normal time.

The win was made all the more important when second-placed Besiktas could only draw on Monday, with their game against high-flying Rizespor ending goalless.

The result was also good news for Kasimpasa, who moved above Rizespor into third and within a point of Besiktas as a result of that stalemate and their 3-1 win at Genclerbirligi on Saturday.

Kasimpasa came from behind to record their second victory in a row, while champions Galatasaray picked up their first Super Lig success in six games with a 2-1 defeat of Karabukspor.

Goals in either half from Wesley Sneijder were enough to secure the three points and move Roberto Mancini's side into 11th place.

Elsewhere, all the drama came in the final two minutes of the game between Bursaspor and Kayserispor on Monday, as Cleyton was sent off a minute from time before Pablo Batalla and Enes Unal scored and Abdullah Durak also saw red.

Gaziantepspor and Konyaspor shared the spoils in a six-goal thriller at the Kamil Ocak Stadyumu, with the hosts having turned around a 1-0 deficit to lead within the hour.

However, two goals in three minutes from Recep Aydin and Hasan Kabze ensured the visitors left with a point.

Eskisehirspor bounced back from defeat to Besiktas by beating Elazigspor 2-0 thanks to goals from Alfred N'Diaye and Cristobal Jorquera, while Antalyaspor edged Akhisar Belediye by a goal to nil courtesy of Gokcek Vederson's first league strike for the club.