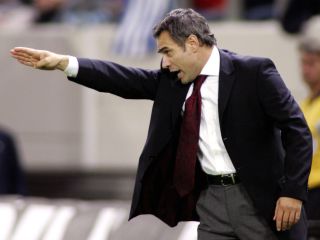 Ersun Yanal’s men have had a fine start to the season and they had no trouble keeping that up at Sukru Saracoglu with Emmanuel Emenike netting a brace alongside Moussa Sow’s effort to clinch the comfortable win.

They were unable to take the clean sheet though, Semir Stilic scoring his first league goal of the season in the 75th minute to give his team a glimmer of hope at 2-1 that Emenike ruled out 10 minutes later.

Fener's weekend got better on Saturday, with Istanbul rivals Besiktas - who went into the weekend second - held to a draw by Akhisar Belediyespor.

A double from Bruno Mezenga and Bilal Kisa cancelled out Olcay Sahan's opener to put Akhisar 3-1 up after 37 minutes.

However, Besiktas battled hard to claw the match back as efforts from Oguzhan Ozyakup and Hugo Almeida ensured they took a point from the match that ended 3-3 at the stadium in Manisa.

The draw was made all the worse after Kasimpasa’s 3-2 home victory over Trabzonspor on Monday, with Shota Arveladze’s men overtaking Besiktas in second as a result.

Goals from Kerem Seras, Adem Buyuk and Ezequiel Scarione to ensure the win for the home side, with Olcan Adin’s 68th-minute effort proving to be a mere consolation for the visitors.

Alongside Kasimpasa’s victory, Besiktas’ result was also contrasted by wins for two other teams around them, with Galatasaray and Sivasspor continuing their good form by overcoming Kayserispor and Kayseri Erciyesspor respectively.

And while Roberto Carlos’ side had little trouble against Erciyesspor, beating them 2-0 on Friday, Galatasaray saw their hosts cancel out a two-goal advantage before the half-time break.

Goals from Burak Yilmaz and Didier Drogba sealed the three points, with a final score 4-2, but they still sit level on points in the table with Eskisehirspor, who beat Rizespor 4-1 on Sunday.

Elsewhere in the weekend’s action, there was more disappointment for Elazigspor and Karabukspor who failed to win again in their matches with Genclerbirligi and Antalyaspor.

The 2-1 defeat marks Elazigspor’s fifth league loss in a row, while Karabukspor’s 1-1 draw with their opponents was slightly more positive, ending their run of three consecutive defeats in the competition.

Bursaspor continued their fine recent form, securing a third league win on the bounce with a 1-0 victory over Konyaspor, courtesy of a goal from Ferhat Kiraz.