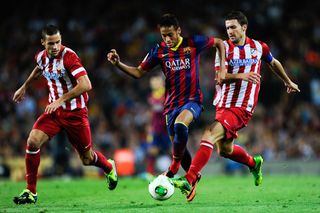 Barca star Lionel Messi was fit for the clash despite missing their weekend battle with Malaga, although the usually clinical Argentine missed a penalty late on.

Nonetheless, the Catalan club held on for their 11th Supercopa in the club's history, and their fourth in five years - claiming the silverware on away goals after the first leg in Madrid finished 1-1.

The game was void of clear-cut chances for much of the opening 45 minutes, with the best opportunity of the half falling Atletico's way in the shadows of half-time.

Atletico left-back Filipe Luis burst down the wing and squared a ball for Turkish attacker Arda Turan, who turned Gerard Pique inside out, galloped into the box and lashed a blistering shot - only kept out by a brilliant reflex save from Barca custodian Victor Valdes.

There was much more action in the second stanza as both teams upped the ante to find a winner.

But as the second half went on, tensions flared - and Atletico bore the brunt with two red cards, one to Filipe for lashing out with an elbow at Dani Alves off the ball.

Turan then saw red, but only after he had already been substituted 20 minutes earlier.

Messi had the chance to ice the game from the spot, but he fired his penalty into the crossbar, after Pedro was crashed into inside the area to earn the spot-kick.

The match was significant for Barcelona as it was Brazilian starlet Neymar's first start for his new club, after he scored what proved to be the cup-winning goal in the first leg when he was a second-half substitute.