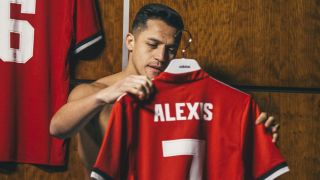 Alexis Sanchez is "a ready-made superstar" who will lift the performances of Manchester United's players, according to Ryan Giggs.

Questions have been asked about where the 29-year-old, who is reportedly set to earn in the region of £350,000 a week, will play in Jose Mourinho's side, with competition in attacking areas coming from Romelu Lukaku, Anthony Martial, Marcus Rashford, Jesse Lingard and Juan Mata.

But United great Giggs believes Sanchez's versatility will alleviate any such concerns and expects the arrival of the former Barcelona star to force his new team-mates to step up their efforts.

"Manchester United signing Alexis Sanchez is similar to Robin van Persie [in 2012] in the sense that they're getting a ready-made superstar and you're seeing the contribution already with Anthony Martial upping his performances," Giggs told Sky Sports.

"That can happen when top players come in, those around them lift their levels, and there will be some difficult selection decisions for Jose Mourinho.

Enjoy the best behind-the-scenes footage from a memorable day for ...Great to have you,  January 22, 2018

"It is an extra bonus that he can play in the Champions League. To have somebody like that, who won't be fazed by playing in the big games, makes the squad look really strong.

The defence is obviously doing really well as well, with Ashley Young back, Luke Shaw fit and Chris Smalling and Phil Jones really solid, so I don't think they need to do any more business this month."

Giggs is disappointed Mkhitaryan's United career did not match expectations and compared the Armenia international to Juan Sebastian Veron, who underwhelmed at the club following a then-record £28.1m move from Lazio in 2001 and left for Chelsea just two years later.

"I think as well as every United fan I was excited to see Henrikh Mkhitaryan join the club and he looked on the outset like a United player, scoring and creating goals," said Giggs.

"I played with Juan Sebastian Veron, who was one of the most talented players on the planet, but sometimes it happens where it doesn't work out, maybe because of injuries or maybe being played out of position.

"Maybe it will work out for him at Arsenal and he'll set the place on fire, so I'm not sure who has got the best part of the deal, but Sanchez has scored and assisted more goals in the Premier League."