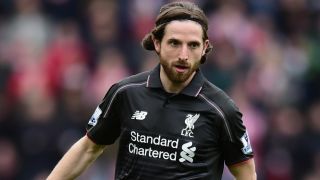 Swansea City's new owners are in discussions over bringing Liverpool midfielder Joe Allen back to the Liberty Stadium.

Allen, who joined the Swansea youth set-up at the age of nine, moved to Premier League side Liverpool in 2012 after former club boss Brendan Rodgers spent £15million on the Wales international.

The 26-year-old has a year left on his contract at Anfield but is reportedly keen to move on if there are limited opportunities under manager Jurgen Klopp.

Reports suggest Stoke City have put in a £13m bid for the Welshman, but Swansea have joined the race and are keen to lure him back.

"He [Allen] is certainly someone we have our eye on and we are discussing making a bid," said investor Jason Levien, who along with fellow American Steve Kaplan recently completed a £100m takeover of the Premier League club.

"We spent time thinking how additions to the club will fit in with the structure and he is someone with a great history here.

"He is still a young player. He is someone who multiple clubs are interested in, us included."

Swansea chairman Huw Jenkins added: "We discussed [a move for Allen] with Liverpool a few weeks back.

"Stoke have made an offer. The player will decided where he wants to go.

"Liverpool are asking a fair fee for the fact he has one year left on his contract but they are entitled to."