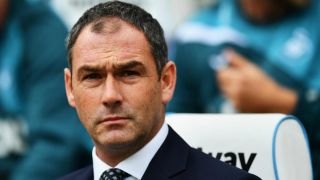 Swansea City boss Paul Clement claims his team deserved at least a point against West Ham and were "arguably the better side" in the 1-0 defeat.

The goal leaves Swansea to stew in the bottom three over the international break with only three goals and five points to show for their first seven Premier League outings.

But former Bayern Munich assistant Clement insists it could easily have been different after a promising start to the match.

"I think over the course of the game we were very much in it and arguably the better side," he told Sky Sports.

"Particularly in the first half when we had good control of the game and were getting the ball forward into the attacking third.

"What was missing for us in the first and second half was that little bit of quality to create good opportunities.

"I was much more pleased with the way we played football today, but clearly disappointed to have at least not come away with a draw."

Having scored in only two league matches this term, Swansea's attacking woes could yet grow deeper after Wilfried Bony was withdrawn due to hamstring tightness.

The Ivory Coast forward looked his side's biggest danger over the first 45 minutes, but went off at half-time and is now a doubt for the clash with Huddersfield Town in two weeks' time.

"He was a little bit tight in the hamstring. We don't know if he has injured it or whether it was just tight. We will see in the next few days," Clement said.

"When everyone comes back [from the international break], we have got a massive game against Huddersfield at home."