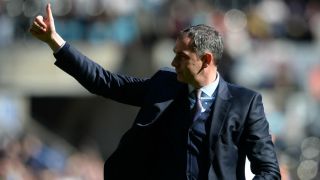 Swansea City do not require "major surgery" during the close season, according to Paul Clement, the man responsible for breathing life into the Welsh club's ultimately successful fight for Premier League survival.

Clement arrived at the Liberty Stadium in January as Swansea's third manager of the campaign, following the dismissals of Francesco Guidolin and Bob Bradley, and secured survival with a 2-0 win at Sunderland last weekend.

Sunday's 2-1 victory over West Brom made it 29 points from 19 matches under Carlo Ancelotti's former assistant, seeing Swansea to 41 points in total and a 15th-place finish.

And the club's recovery since Clement's appointment has given the head coach confidence that his team can go into next season with renewed belief, echoing chairman Huw Jenkins' comments this week that there was no need for an overhaul.

"It's very satisfying to break that 40-point barrier," Clement told BBC Match of the Day. "Twenty-nine points for the second half of the season is very, very pleasing.

"I had belief in what I was doing. The players responded fantastically and it was a big team effort.

"Ultimately, the objective was to keep the team in the league. For me there were more wins than that. We created a great team spirit. I think the club is on its way back to getting its identity back.

"I don't think this squad needs a big overhaul. Given the points we put on at the end of the season, I don't think we need major surgery."

Jonny Evans gave West Brom a 1-0 lead at the Liberty Stadium before second-half goals from Jordan Ayew and Fernando Llorente turned the scoreline on its head.

The result meant the Baggies were unable to match their best Premier League finish of eighth.

"We're disappointed," said head coach Tony Pulis. "1-0 up and we had the opportunities and chances to score the second.

"Their first goal is shocking defending from us. For the first hour, I thought we controlled the game.

"The lads have worked really hard this year. We've got punished in both thirds of the pitch at the end of this season.

"I'm desperately disappointed the lads have got nothing out of the game today because they deserved it."