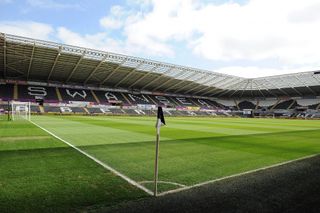 The Welsh club have been in the top flight since winning promotion from the Championship in 2011 and regularly sell out their 20,520-seat home.

As such, chairman Huw Jenkins confirmed at a fans' forum on Thursday that planning permission had been submitted to increase that to 32,000.

If approved, the first stage will see 6,000 extra seats added to the stadium's east stand.

"Planning permission has gone in to take the stadium up to 32,000 seats," Jenkins said.

"There are four floors on the new design which will be opened up, two as concourses and two as hospitality suites and potentially 20 new boxes to hire.

"Probably in six to 12 months we'll have a good guide about where we are. In terms of when we're actually going to start it could be anything from next January to next summer."

The news follows a strong start to 2014-15 for Swansea. They sit fifth in the Premier League having started their campaign with a stunning 2-1 win at Manchester United.