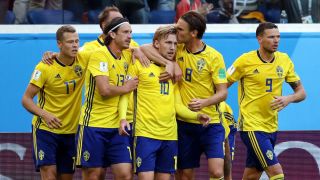 Sweden are through to the World Cup quarter-finals for the first time since 1994 after a deflected goal from Emil Forsberg clinched a 1-0 win over Switzerland.

The first meeting between the nations at a major tournament simmered for 65 minutes in St Petersburg until Forsberg's fortunate strike handed Sweden a crucial lead.

The RB Leipzig playmaker's tame effort was heading straight at Yann Sommer until Switzerland defender Manuel Akanji stuck out a foot, sending the ball looping beyond his wrong-footed goalkeeper.

Forsberg also produced a well-timed clearance in his own penalty area to preserve the advantage against a Switzerland side who finished with 10 men, defender Michael Lang seeing red after clipping the heels of Martin Olsson just outside the penalty area when the substitute was clean through on goal.

Referee Damir Skomina initially gave a penalty deep into stoppage time before VAR intervened, though the change of decision made no difference to the final outcome of the contest.

The only disappointment for Sweden was a first-half booking picked up by Mikael Lustig, ruling the defender out of a last-eight clash against either Colombia or England in Samara on Saturday.