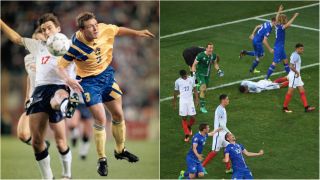 England must beat Sweden to reach their first World Cup semi-final in 28 years, but their record against Scandinavian sides is not encouraging.

Gareth Southgate's men shifted one considerable monkey from their backs against Colombia on Tuesday with a penalty shoot-out victory - their first in World Cup history.

But another hoodoo looms large in Samara on Saturday as Sweden - who defeated Switzerland 1-0 - stand between them and a place in the last four against Croatia or hosts Russia.

"Sweden are a team I respect hugely," Southgate said after the physical and emotional rollercoaster against Colombia. "We've not got a good record against them, I think we've always underestimated them.

"They have good plans, they have a clear way of playing - and it's bloody difficult to play against. They are greater than the sum of their parts more often than not, so that is a hugely difficult game for us."

England, on paper at least, appear favourites, but since their last World Cup semi-final appearance at Italia 90, the Three Lions have won just three of 13 competitive matches against Nordic nations.

Southgate is right to urge caution.

A few weary legs in the camp today, but the boys are back to work as attention quickly switches to Saturday's quarter-final. 4 July 2018

The sequence began with this goalless draw in Malmo, and it could have been worse for Graham Taylor's side had John Jensen's shot not struck an upright and rebounded kindly into the arms of Chris Woods. Standing in for Yugoslavia at the last minute, Denmark famously went on to lift the trophy.

England, meanwhile, were dumped out of the group without a win following this defeat to the hosts. David Platt opened the scoring early on but Sweden turned it around through Jan Eriksson and Tomas Brolin to send Taylor's men packing and prompt the famous headline 'Swedes 2 Turnips 1'.

In a tightly contested section, England were punished for taking just one point from their two matches against the eventual table-toppers, conceding a late equaliser to Kjetil Rekdal at Wembley before future Premier League imports Oyvind Leonhardsen and Lars Bohinen struck in Oslo. A third-place finish behind Netherlands meant England failed to reach a World Cup for the first time since the 1970s.

Another qualifying campaign and another solitary point from two matches against Scandinavian opposition thrust England into a play-off against neighbours and fierce rivals Scotland, where Paul Scholes saved the day.

Four days after a 1-0 loss to Germany in the final match at Wembley, which prompted Kevin Keegan to resign, England - led by Howard Wilkinson - were held in Helsinki. The officials failed to spot that Ray Parlour's shot had crossed the line after striking the crossbar, and the result left England bottom of the group. A come-from-behind 2-1 win at Anfield aided the recovery, capped off by that David Beckham free-kick against Greece at Old Trafford.

Sven-Goran Eriksson had been appointed Keegan's permanent successor and his first tournament outing came against his countrymen. Sol Campbell headed England in front but Niclas Alexandersson ensured the points were shared. Beckham's redemption against Argentina and a draw with Nigeria saw the Three Lions through to the last 16...

...Where they faced Denmark. Their Scandinavian struggles were nowhere to be seen in Niigata, though, as first-half goals from Rio Ferdinand, Michael Owen and Emile Heskey ensured safe passage.

What an amazing display, Team Sweden! Can you believe it, we're through to the World Cup quarter-finals after beating Switzerland 1-0! 3 July 2018

It was deja vu four years later as once again Eriksson came up against his compatriots in the opening phase. After Owen's tournament was ended by a serious knee injury early on, Joe Cole's wonder-goal proved the highlight of an entertaining draw that saw England top the group, only for Wayne Rooney's rage and a winking Cristiano Ronaldo to deny them in the quarter-finals.

A rare success story amid the Nordic nightmare, as Roy Hodgson's men led through Andy Carroll's fine header but found themselves trailing with half an hour to play. Theo Walcott's looping effort and Danny Welbeck's backheel swung the result back in their favour but, after being outclassed by Italy in the quarter-finals, the penalty shoot-out curse struck again.

The most shocking and humiliating defeat of this undesirable collection. Strong favourites against the major tournament debutants, England were already thinking of a blockbuster last-eight tie with hosts France, only to be caught cold by Iceland. A lesson, if Southgate and England ever needed one, in not looking too far ahead.