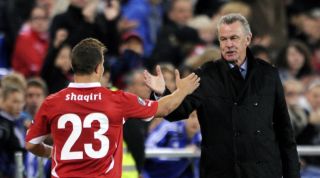 The Bayern Munich starlet struck a superb treble as the European side beat Honduras 3-0 in Manaus on Wednesday.

That earned a spot in the next phase after Ecuador only managed a 0-0 draw against France - who advanced as Group E winners ahead of Hitzfeld's men.

The head coach said: "Xherdan Shaqiri was excellent – he really displayed what he's capable of."

While Hitzfeld threw expected praise in the direction of his hat-trick hero, he was also quick to praise the other Swiss players.

He added: "We played well as a team – and they deserve my congratulations.

"We played a strong team in a difficult conditions. It was very humid. We showed great attitude, will and passion and that got us through."

Attention now turns to a mouth-watering second-round clash with Argentina, who won all three group games to advance.

"Now we need to recover – we have six days which I’m happy about and during that time we’ll get well prepared for the Argentina game," Hitzfeld said.