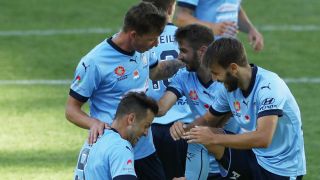 Sydney FC preserved their 100 per cent record with a 4-1 win at home to Perth Glory in the A-League on Sunday.

Former Serbia international midfielder Milos Ninkovic scored twice as table-topping Sydney made it six victories from as many matches this season to stay six points clear.

Ninkovic, who has been linked with a move away from Allianz Stadium, continued his fine form with the game's opening goal in the 14th minute, capitalising on some miscommunication in Perth's defence.

Brazilian striker Bobo doubled the lead seven minutes before the break, tapping in from close ranging after being played in by Ninkovic.

The Glory, though, refused to surrender and they were given some hope in the 62nd minute when Rhyan Grant turned the ball into his own net, until Ninkovic netted his second of the match with 11 minutes remaining.