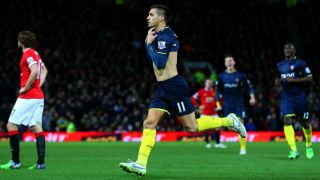 Southampton's super-sub Dusan Tadic has scored in back-to-back appearances against Watford and West Brom and now he has set his sights on more goals at Old Trafford.

Tadic and his team-mates travel to Manchester United on Saturday buoyed by memories of their last visit, when the Serbian scored the only goal of the game.

He is now hoping for more of the same as Ronald Koeman's side seek to make it three wins on the bounce.

"Happy memories, that was really good. It's one of the best memories, for me and for the club," Tadic told the Daily Echo.

"It would be nice for it to be the same result, but we need to respect Man Utd. They are one of the biggest teams and also play good football.

"They have played good games and sometimes they have not been so lucky. It's always hard to play against them. We will go with confidence, but you never know with football.

"The most important thing is that we play well as a team. Then it is easier for everyone to show what they can do."

Tadic will have another striker to compete with for a starting position following the acquisition of Charlie Austin, but the Serb has welcomed the competition.

"It's nice always to have a lot of good players. This makes competition better."