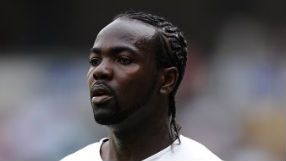 Tagoe, who joined Serbian champions and league leaders Partizan Belgrade in January on loan from Bundesliga side Hoffenheim, was used as a midfielder in Ghana's 2010 World Cup campaign, when they reached the quarter-finals.

The 24-year old hitman, who has scored five goals in 25 internationals, was on target in Partizan's 4-0 league win at Hajduk Kula on Wednesday after netting a brace in last weekend's 3-1 victory at Indjija.

"Tagoe's good form is a massive boost for us ahead of our African Nations Cup qualifier at Congo on March 25, especially because we will miss Asamoah Gyan through suspension," former Partizan and Yugoslavia midfielder Stevanovic told Reuters.

Stevanovic, who will make his competitive debut as Ghana coach against Congo, said Tagoe would definitely start, while Partizan's other Ghanaian striker, Dominic Adiyiah, would be included in the squad.

The Ghanaians top Group I with four points from two matches, ahead of Sudan on goal difference. Congo are third one point adrift of the leaders while Swaziland are bottom with no points from two games.

Tagoe, who scored just two goals in 18 appearances for Hoffenheim after he joined them in 2009, has quickly settled at Partizan.

He scored either side of halftime at Indjija and headed home an early opener at struggling Hajduk Kula to keep Partizan five points clear of city rivals Red Star, who they meet in the Cup semi-final first leg next Wednesday.

"The first impression is usually the most important and Tagoe has left a tremendous first impression, having shown that he will be a real bonus for Partizan in their bid to win the domestic double," Stevanovic said.

"But he has to keep working hard because every player in the Ghana squad has to earn his spot in the starting line-up and that's what I expect him to do."