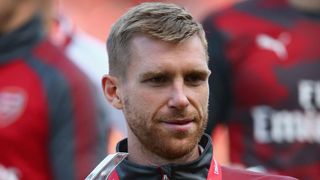 Arsenal defender Per Mertesacker has sent a message to the club's young players as he prepares to become the new academy manager, saying: "Talent means nothing to me".

The 32-year-old remains captain and has a year left on his playing contract at the Emirates Stadium, but the club confirmed in July he will take over as the head of youth development at the end of the 2017-18 season.

Arsene Wenger described Mertesacker as "an inspirational figure for everyone connected with the academy" when announcing his new role, and the former Germany international has already outlined his approach to bringing through the next generation.

"Talent means nothing to me, it's all about hard work," Mertesacker told the Arsenal Magazine.

When asked about his attitude towards young players, he said: "I put the emphasis in that they're not told how talented they are too much. Talent is what you make of it.

"I respect them highly but the only ones who will make it are the ones who make the most of their potential."

Mertesacker has made 150 Premier League appearances for Arsenal since joining the club from Werder Bremen in August 2011, and he has become a highly respected figure at the north London side.

His task as academy manager will be to ensure the club's youth system continues to prepare players for first-team football, following the example set by the likes of Alex Iwobi in recent seasons.

"It's good for me to see these youngsters on a daily basis," said Mertesacker. "Some went with us on tour and now they'll keep training with us, which is really important.

"It's not only one or two weeks where you show up and show your skills, or in one or two games. To do that on a consistent level, because they're not in the first-team dressing room at the moment, it creates a little bit of a gap.

"That can mean they don't know where they are. Are they under-23s, under-19s or first team?

"It's important that we keep in touch, communicate well. They've got huge potential and have high levels of skill, but it's what you make of it. That's something I'm going to address in the next couple of years."