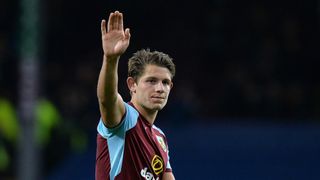 James Tarkowski has signed a new contract at Burnley, committing his future with the Premier League surprise package until 2022.

Tarkowski has excelled having stepped into the team to replace Michael Keane after the England international signed for Everton last July, starting 19 Premier League games.

The 25-year-old was ever-present for the Clarets - leading to speculation he could receive a maiden England call-up - before receiving a retrospective three-game ban for an elbow on Brighton striker Glenn Murray.

With Manchester City, Chelsea and Arsenal having all been linked with the former Brentford defender, Burnley have moved to tie him down to a new long-term deal.

"I'm happy. It's been a good season so far and it's nice to be rewarded by the gaffer and the club in this way," Tarkowski told Burnley's website.

"Hopefully I can carry on paying them back and put in some good performances.

"Since Keano left, the club has put the trust in me, so far, to take that position on. I feel like I've done quite well so far and hopefully long may that continue.

"I have said it for a long time, this is a long-term project for me and the club so hopefully we can all continue what's been a positive season so far."

SD: "We felt it appropriate to offer James a new deal on two levels. He's done well in the Premier League and secondly his contract was out of sync. And there's a few more we are talking to."January 4, 2018

Burnley boss Sean Dyche confirmed in a news conference on Thursday that Canada international Scott Arfield will not be available for Saturday's FA Cup clash with runaway Premier League leaders Manchester City due to injury.

Dyche, who will rotate his high-flying side for the trip to the Etihad Stadium, added that contract talks are ongoing with a number of Burnley players.

"I mentioned recently we have a good collection of players, ones we enjoy working with, and they are under good contracts," Dyche said. "Tarky was, but we felt it appropriate.

"There's another couple we are talking to already. We try to work on a level of fairness and making sure players are on appropriate contracts at the right time. Tarky fits into that really."