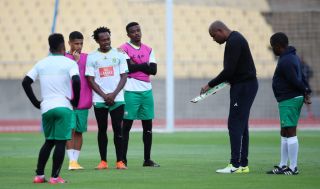 Bafana Bafana forward Percy Tau is relishing the chance to represent the national team in this week’s international friendlies against neighbours Namibia and Zambia.

The 26-year-old arrive in South Africa on Tuesday morning from Belgium, where he plays for Anderlecht in the Belgium Pro League.

Tau reported for national team duty and was involved in training as Bafana prepares for the international break.

The South African national team are schedule to take on Namibia and Zambia at the Royal Bafokeng Stadium in Rustenburg on 8 October and 11 October, respectively.

‘It is always wonderful to come home and be with my brothers to represent the country,’ Tau told Safa.net.

‘This was a long trip with all the COVID-19 regulations in Belgium because we are currently in winter.

‘However, I am glad to finally be here. I am ready to serve my nation as usual.’

Tau is enjoying life in Belgium but would like to see his side become more consistent in the league as they current sit seventh on the table after claiming two wins, two draws and ne defeat after five matches.

‘Life is OK and we’re getting some good results‚ but then we’ve also lost a game. We’ve just lost one game and drew a couple‚ we still have to get more points,’ he added.

‘It’s getting there‚’ he said. ‘I’m still new at the club and I have only played seven games and it’s a new coach [Kompany] who’s just finished playing football‚ and is now switched to become a coach.

‘So everything is still new, but then I will see with time how everything develops. We also signed some new players.’

The former Mamelodi Sundowns star has already racked up 21 caps for the national team, while scoring nine and assisting a further three since making his debut on 17 October 2015 under then coach Ephraim ‘Shakes’ Mashaba.

‘Of course, I came home to play,’ Tau said. ‘And it’s always a great opportunity for me to play for the national team.

’Also, it’s good to see the other guys here. We just want to see how we’re feeding off each at training today [Wednesday] so that we know we can trust each other.

‘So it will be good to see how we all interact.’