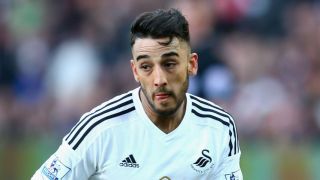 Taylor struggled under previous boss Francesco Guidolin, and was taken off before half-time in his only top-flight start of the season.

He says his team-mates have given the early thumbs up to Bradley, and he is excited about working under him.

Swansea sit 17th in the Premier League table ahead of a trip to Arsenal on Saturday.

"He strives to get the best out of players. The lads have said training has been really good," said Taylor.

"There will be different ideas. I am looking forward to meeting him and he looks a really exciting manager. He looks up for it and backs his ability.

"He looks very motivated and that is great for the players. We can feed off him, we need to use that to pick up results. I'm sure we'll get the message nice and clear."

On his own start to the season, Taylor said: "There are ups and downs for every footballer, you just stay on a level playing field whether you are up or down.

"You keep working the same way, things come back around - that is the way football is."